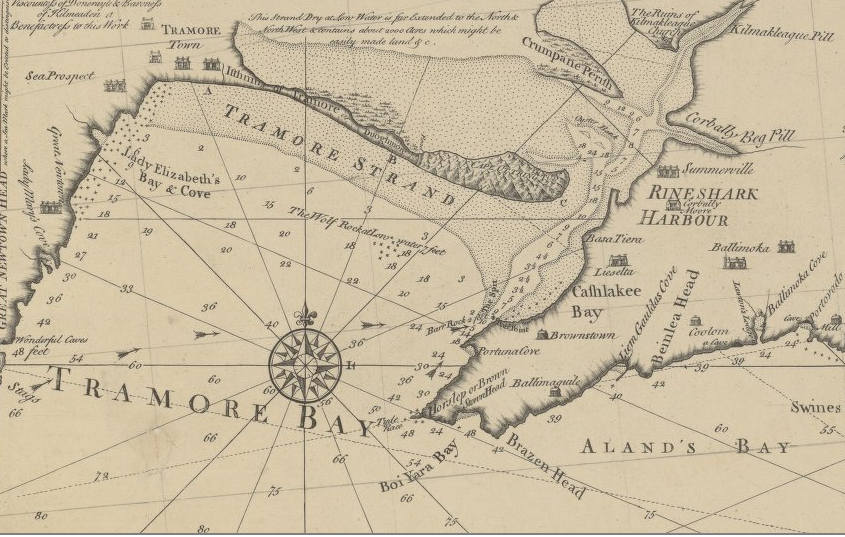 At about ten o’clock in the morning, Tuesday, 5 February, the brig Fox, Master John Gresly, of and from Jersey bound for Waterford was driven into Tramore Bay, where she was stranded. As soon as she struck, the crew, 8 in number took to the boat and made for the shore, within about 30 yards of which it upset and they all perished in the sight of many spectators who found it impossible to afford the least assistance. She was thought to have come from Spain, as her cargo consisted of corkwood and oranges. It was believed that she would go to pieces in the night. Meantime the officers of the customs were busily employed discharging the cargo, which was protected by a detachment of the Roscommon Militia.[1]
A letter from a gentleman, who was a witness of the whole transaction, has painted the exertions of the inhabitants of Tramore to rescue their fellow creatures from death in the most animated terms of well merited approbation. The sea ran dreadfully high, and menaced almost certain destruction to any person who should venture to make an effort in favour of the sufferers; no boat was at hand, but notwithstanding this, and in the face of the most imminent peril, several men forced their way through the breakers, and had nearly approached the unfortunate strangers, when they sunk, to rise no more! These men continued swimming for about half an hour near the fatal spot, and did not quit it until every hope of success expired. The boat and some wearing apparel were all that they were enabled to bring on shore, Yesterday, the vessel was lying high up on the sands, and washed for about an hour at the height of the tides. Had the crew remained on board, their lives would have been saved, but, in such moments, whose prudence remains so unhinged as to guide him to the wisest course? The cargo of the brig consists of Lemons, oranges and wine.[2]

The vessel which was unfortunately lost in Tramore bay on Tuesday se’nnight, proves to be the Fox, John Gresby, master, of and for Jersey, bound to Waterford. Such part of her cargo as was saved, consisted of oranges, staves, corkwood, and a few puncheons of cider, together with the spars, rigging, cables, anchors, &c. were brought into the exchange of Waterford, and sol by auction, for the benefit of the owners. The hull lies considerably higher than low water mark, on the beach appropriated to gentlemen during bathing season. It is to be regretted that the crew did not remain in the vessel, as, on the ebbing of the first tide, she was left dry and firm; and their deserting her as they did, can only be accounted for by supposing they were ignorant of the nature of the shore. None of the bodies have yet been found. It appears that when the crew saw the breakers a head, they hove out the anchor, which, however, did not bring the vessel up, and when they found her driving they unhappily took to the boat, which, as we lately mentioned, was upset by the heavy surge as they approached the shore, and the whole crew experienced one melancholy fate. The exemplary behaviour and humane conduct of the inhabitants of Tramore, deserves the highest praise. No boat was at hand, nor indeed could one live in the dreadful sea which rolled into the bay, but regardless of every danger, several brave fellows threw themselves into the water, and long battled the roaring waves, in their endeavours to rescue their fellow creatures from destruction. Their efforts, we grieve to say, were unavailing, but they are equally entitled to the commendation of the friends of humanity; and are worthy of some substantial mark of approbation at Lloyd’s.[3]

Our readers recollect the humane and intrepid exertion employed by some of the inhabitants of Tramore, in order to save the crew of the brig, Fox which, some time ago was unhappily wrecked in the bay. Those exertions received, as they well deserved, public gratitude and approbation, while they must have afforded a satisfaction of the highest kind to the minds of the men themselves. At a late meeting of the Merchants of this City, it was unanimously resolved, to convey to these men the approbation of that respectable Body of their conduct, and to confer upon each of them a pecuniary donation as a reward for their generous and manly endeavours to preserve the lives of their fellow creatures. Two of the Body went to Tramore on Tuesday last, and executed this commission in a manner highly gratifying to the inhabitants, and likely to be productive of similar efforts, if they should unfortunately be called for by similar disasters. The circumstance at the same time furnishes anew and pleasing proof, of the liberality, and zeal for the common good, with which the Merchants of this City are ready on every occasion to stand forth.[4] 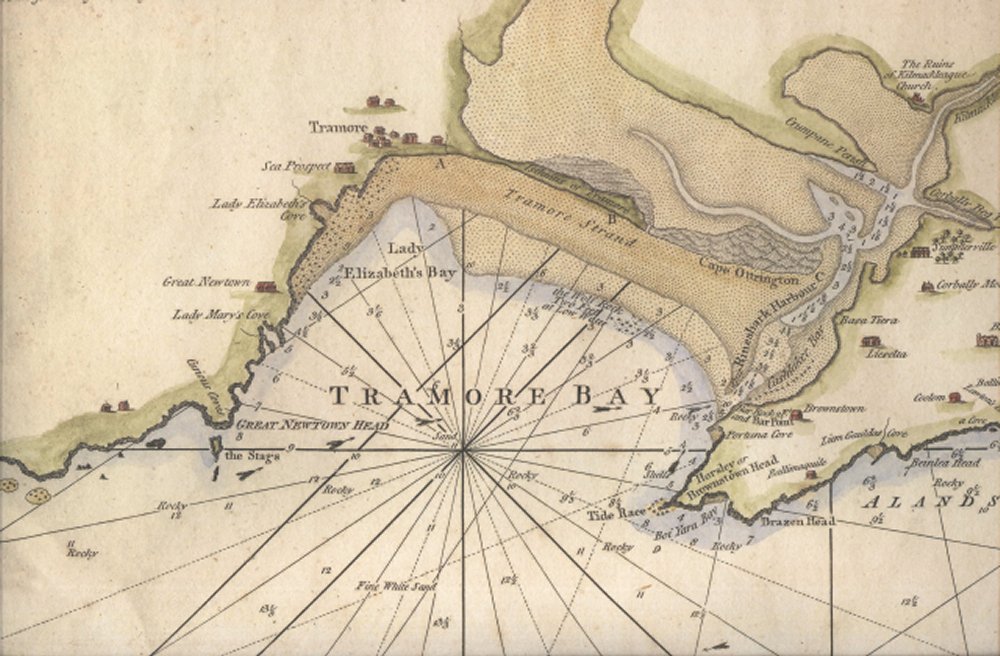